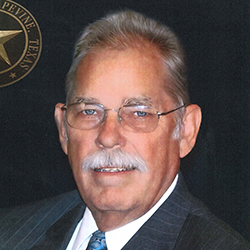 William D. Tate grew up in Grapevine, becoming a major civic leader in the Grapevine area. Like his grandfather, who was Grapevine’s first Night Watchman, and his father who was also a community leader, Bill has carried on the family legacy. Graduating from GHS in 1960, he left his mark as Mr. GHS, a Lone Star Farmer, a Basketball Team Captain, and was named All- District First Team Basketball and Football. He was a member of the GHS Student Council and won the Citizenship Award. After graduating from North Texas State University, he earned his law degree at the University of Houston and started practicing in the Grapevine area.

Like his father and grandfather before him, in 1975 William D. Tate was elected as Grapevine’s Mayor; elected again in 1988, he has served continuously since then. For over 40 years his vision has led the transformation of Grapevine from a small agricultural town to a destination city with transportation, retail, hospitality, and entertainment while preserving the historic areas and buildings of the city. Mr. Tate has spent much time and energy with children in the GCISD classrooms as well as coaching on the soccer fields. He has always been involved in the community including the Grapevine Rotary Club, Grapevine Lion’s Club, Grapevine Masonic Lodge, and Boards of Directors for Baylor Medical Center and First National Bank. He also served as President of the Crime Prevention District and the 4B Economic Development Board. He even serves as a Heritage Gunfighter in many of Grapevine’s festivals.

He has received many honors and is considered one of Texas’ Most Outstanding Public Officials. Some of his awards include the Boy Scout Silver Eagle Award, Grapevine’s 1976 Citizen of the Year, a GHS Hall of Fame inductee in 1989, President’s Award from Grapevine Chamber of Commerce in 1990, Who’s Who in Texas, DAR Community Service Award in 2010, Hospitality Industry Development Award from the Texas Travel Industry Association, and the Texas Hotel and Motel Association 1998 hospitality Hero Award. He has also received the Fort Worth Builders’ Lifetime Achievement Award, and too many more to list. Probably the best recognition for his outstanding contributions to Grapevine and GCISD is the naming of William D. Tate Avenue in his honor.