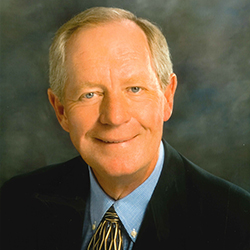 Under his leadership as superintendent from 1993 to 2000, Dr. Thompson launched GCISD into the 21st century transforming it into the district we know today. During those years GCISD experienced exponential growth leading to the development of a second high school campus, four new elementary campuses, and a new primary building addition. Dr. Thompson’s expertise and leadership focused the District to solve the demands for classrooms and teachers as well as the heavy construction needs. GCISD would not be the destination school district that it is today without Dr. Thompson’s vision and leadership.

He has received numerous honors including the PTA Council award in 2002, the Dr. Jim Thompson Exemplary Achievement in Education Award, named in his honor and still active today. In 2006, he was recognized by the Grapevine-Colleyville Education Foundation, receiving the Distinguished Friend Award. He was instrumental in the creation, development, and success of the GCISD Education Foundation. Earlier in his career he was named the Superintendent of the Year in 1989 by the American Association of School Administrators and was elected the Kansas Superintendent of the Year in 1990. He was also awarded with Honorary Life Membership in the Texas Association of School Administrators in 1990 and received the Excellence in Education Award in 1992.

After retirement Dr. Thompson has remained invested in the community, continuing to serve with the Education Foundation and the Association of Retired School Employees.