The GCISD Walk of Honor 2020 Honorees have been announced! Congratulations to the honorees – Joseph N. (Joe) Box, Bob Burrus, Phil Parker and Ted Ware – and their families.

The GCISD Walk of Honor seeks to identify and recognize individuals who have become an important part of the GCISD story. Anyone may complete a nomination form and submit the required documents to the Walk of Honor Selection Committee. Each fall, new honorees are honored at a recognition event, and a permanent display of all honorees is housed at Mustang Panther Stadium in the Walk of Honor area.

To find nomination information, click on the “nominate” tab in the upper right corner of this page. Please note that the Nomination Form and Selection Considerations were revised in August, 2019. Please do not use an old form that was acquired prior to the revision.

The GCISD Walk of Honor Committee deeply appreciates the support of our leading donors Doug and Sharron Rogers.

Doug and Sharron Rogers are Grapevine residents with a deep appreciation for the individuals who created and brought honor to the great cities and school district in which we live.

The Rogers are strong supporters of education. Doug began his career as a teacher. He was a vice-principal, a principal, and holds a Superintendent’s Certificate. He retired from a teacher organization for which he was the Executive Director for 24 years. Sharron moved to Grapevine in 1975 when the population was only 7,000. She has helped guide and lead the City of Grapevine first as Chair of the Grapevine Planning & Zoning Commission. She has now served on Grapevine City Council for 34 years. In addition, she has been a member of numerous community organizations.

Doug and Sharron were both born and raised in Fort Worth. Doug was an avid football and baseball player; Sharron excelled in volleyball.

They are pleased to be able to be the lead donors for the Grapevine-Colleyville ISD Walk of Honor. 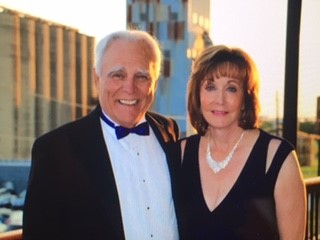